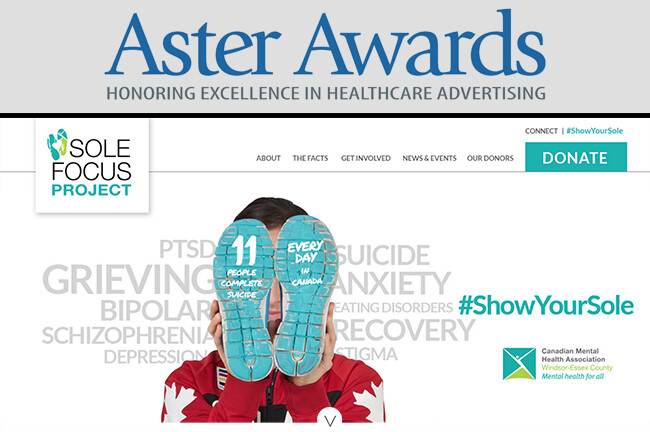 A testimony of the level of engagement and creativity when

the community has a keen focus on mental health!

Windsor-Essex is winning big and being recognized for advancement in mental health education and awareness through the Canadian Mental Health Association’s 2017 campaign, the Sole Focus Project.

Douglas Marketing Group (DMG), a Windsor-Detroit based agency, is proud to accept their second international award for the recently launched campaign, which received a Platinum Hermes Creative Award prior to being honoured with a Gold Aster for “Total Advertising Campaign in Healthcare Education”.

The Aster Awards are among the premiere healthcare marketing competitions in the world, attracting over 3000 entries from the US and other countries. They recognize “some of the best and most creative advertising in the world,” said Melinda Lucas, Aster Awards Program Co-ordinator, and only the top 5% of entrants receive a Gold Award.

DMG worked closely with CMHA Windsor-Essex  to develop the campaign, whose mission is to build awareness for mental health while bringing education and programs forward to support people who are affected by mental illness across the region. The campaign also raises funds to ensure programs and educational outreach is a continuum for the community.

The message: Bring awareness and take a stand to support those affected by mental illness. By profiling everyday people and community leaders, the campaign helped remove the stigma associated with mental illness and shed light on the 1 in 5 people it can affect regardless of age, gender, ethnicity, religion, education, or wealth.

The Sole Focus Project was launched in two parts – through a teaser and reveal campaign – and engaged participation from local leaders across business, media, community, sports and more. In the teaser campaign, identities were hidden by green “soles” until the official campaign launch. From there, recognizable faces were revealed across the region through billboards and social media.

The strategy behind the creative was to profile the people of Windsor-Essex as strong ambassadors for the cause. To date, the partnership support has been outstanding. There was broad reach through traditional and online channels, which was further magnified through communication partners in all sectors. People across the region were sharing their stories using #showyoursole, sparking important conversations and creating visible impact across the region.

Kim Willis, Director, Communications & Mental Health Promotion at CMHA-WECB, thinks the campaign’s clear call to action and striking creative make it a winner with their community partners as well. “The project and communications partnerships have been well received at and we are well on our way to raise the targeted $500,000. We’ve managed to bring together many members of WindsorEssex, from all walks of life, to join us in leading the discussion to put mental wellness front and centre,” she stated. “Douglas Marketing Group helped us develop a campaign that really engages the community in a variety of dynamic ways.” Willis noted that it was the ad agency’s award-winning track record, particularly in the healthcare industry that made DMG the natural choice to craft a delicate, yet powerful message that had to resonate on so many levels.

Liz Farano, DMG’s VP and Creative Director, is aware that marketing within the healthcare industry is a unique challenge “You’re often speaking to diverse groups about very touchy subjects. The Sole Focus Project visualizes taking things from behind the curtain and moving them forward. The campaign was designed to simply present a complicated issue that has historically been in the shadows to shine a light on it and give hope to those affected by mental illness,” says Farano.

Kay Douglas, President of DMG, added “Our strategy and approach includes creating a Big Picture Landscape® (www.bigpicturelandscape.com) that facilitates the development of community and corporate partners through education, engagement and enlistment. Understanding the value gained through a collective approach is key. Building relationships that support each other to maximize reach is a signature of our firm, as is a stellar and talented creative team, who we are very proud of. The award is wonderful, but the results for CMHA and the community is where we measure the true success of our work”.

The team at DMG recently attended the Trans Canadian Advertising Association Network (TCAAN) Annual Conference in Vancouver where they proudly shared the work coming out of Windsor – Detroit, including the CMHA campaign.

For more information about how you can help: